SIX CHARACTERS IN SEARCH OF AN AUTHOR

Six Characters in Search of an Author is yet another performance by director Oliver Frljić in which he mercilessly attacks the Croatian right wing in his own unique way. Although at first seemingly unusual, since it is not based on documentary material but on the famous work by Luigi Pirandello - the topic of which is not political but philosophical - Frljić strikes a blow right from the start. The actors are not preparing another Pirandello’s play but an imaginary, improvised, satirical play, typical of Kerempuh Satirical Theatre, whose characters are true protagonists of Croatian right wing – Hasanbegović, Željka Markić, Tompson, etc. After this fierce, hilarious, and comically full-blooded introduction, Frljić makes a stronger link to Pirandello’s story. From the first appearance of these characters, the audience follows the original narration, though occasionally more or less dramaturgically altered. In that main part of the performance, however, the director does make an intelligent link to the expansion of the right wing, which is the main concept of the performance. While imploring the actors to play their drama, the characters keep referring to "family values", since all of them belong to a somewhat bizarre family. It is exactly this bizarre aspect of those relationships – violence, incest, soliciting of children for prostitution – that represents the inside of the conservative outcry "in the name of family values". It This exclamation thus represents in theatre what it often is in reality: an expression of hypocrisy and moral double standards.

The most famous Pirandello's play and one of the most famous plays in general - Six Characters in Search of an Author - is staged in Satirical Theatre Kerempuh. As far back as 1921, Pirandello’s characters embarked on the search for an author, which still has not finished. Apart from the writer himself, the search has come upon various other things which will also find their place in Frljić’s performance. In the society that has been searching for its identity for the past twenty-six years as obsessively as for the author, this Pirandello’s play about theatre assumes additional meanings. As one of the signatories of the Manifesto of Fascist Intellectuals, Pirandello most certainly echoes in contemporary Croatia - at least by the number of characters who are, unknowingly, searching for him.

LUIGI PIRANDELLO was a versatile Italian literary author whose opus consisted of canonic prose and drama texts that made him famous. Still, it might be worth mentioning that his literary career began with poetry. His work was awarded with the Nobel Prize for literature. We can continue with the enumeration of the author’s works but we think that it might be more interesting to take a peek into Pirandello’s private life, which was controversial, to say the least, and which shaped those texts in which he kept returning to family issues. He was born in the poor south of Sicily, in the family of wealthy and politically active industrialists who were engaged in Il Risorgimento, the movement for the unity and democratization of Italy. His relationship with his father was never good: Pirandello wanted to study literature, while his father insisted he should take over family business. Pirandello started a relationship with a cousin, and faced the ultimatum of having to choose between studies and marriage. He chose the former option and obtained his degree in Germany. Upon graduation, he returned to Italy, got married and fathered three children. His trust in Mussolini was so big that he sent his Nobel Prize medal to the Fascist government, thus supporting Duce’s imperialist aspirations. After he had his wife committed to psychiatric asylum, he came into conflict with Fascist leaders, which put him under constant surveillance for the rest of his life. He died at his home in Rome in 1936, leaving behind one of the most relevant literary opuses of the first part of the 20th century.

OLIVER FRLJIĆ was born in 1976 in Bosnia-Herzegovina. He studied philosophy, religious studies and directing in Croatia and works as a director, author, actor and theorist around Europe. His productions have garnered several awards and invitations to international festivals, including the Wiener Festwochen for his 2010 production Mrzim istinu! (Ich hasse die Wahrheit!), and the Heidelberger Stückemarkt new play festival for Black Box Schule, developed at Schauspielhaus Düsseldorf. From 2014-2016 he served as the artistic director of the Croatian National Theatre in Rijeka. In early 2016 he announced that he was resigning out of protest against Croatian cultural policy. Oliver Frljić is part of a Szenen-Wechsel project (Change of Scene, a Robert Bosch Foundation programme) with the HAU Hebbel am Ufer. In June 2017 Frljić came to the Maxim Gorki Theatre with his production Der Fluch - Klątwa - The Curse, based on Stanisław Wyspiański, as a guest performance. The production's premiere at Teatr Powszechny ignited a political scandal and attracted attention on an international level. In 2018 Frljić worked together with the Gorki's ensemble for the first time. With Gorki - Alternative für Deutschland? Frljić follows the logic of politics to question the theatre and rethink the democratic system.

“There is no doubt that one part of the audience will be scandalized by this performance but scandal is not the fuel used for Frljić's stage coach. On the contrary: scandal is ridiculed as a cheap demagogy in Croatian reality, in place of which the entire ensemble and authors demand seriousness and analytical approach in the perception of societal criminal.”

“In the first 15 minutes, we are confronted with a frightening allegory of the pigsty-state where conservative „elite“ gets high on nation, religion, cocaine and money, not necessarily in that order...”

“Many Frljić's performances emanate anxiety caused by right-wing political and religious extremes. Aware of the organic link between theatre and politics, enhanced by the fact that theatre is a public institution, he uses the space to express criticism of deliberate denunciation, suppression and forgetting, by the means of pretty literal and plastic theatre language of serving, and not of instructing or suggesting.” 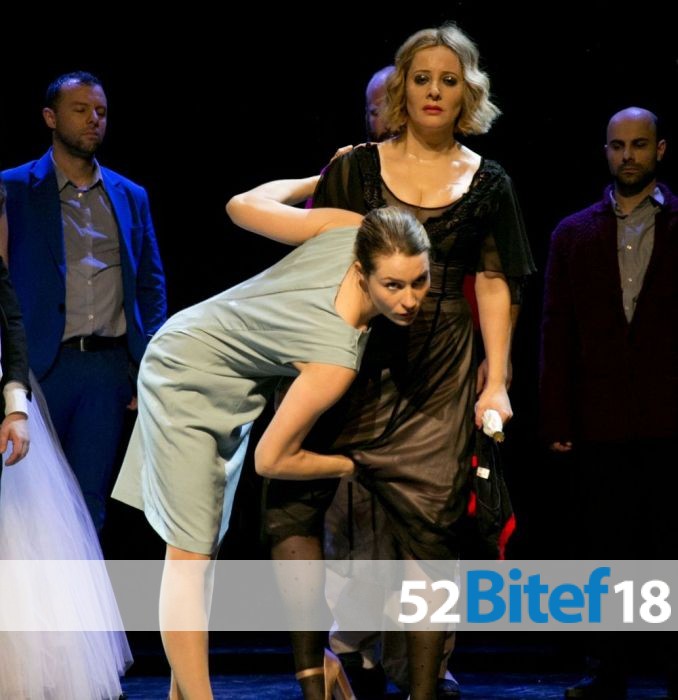