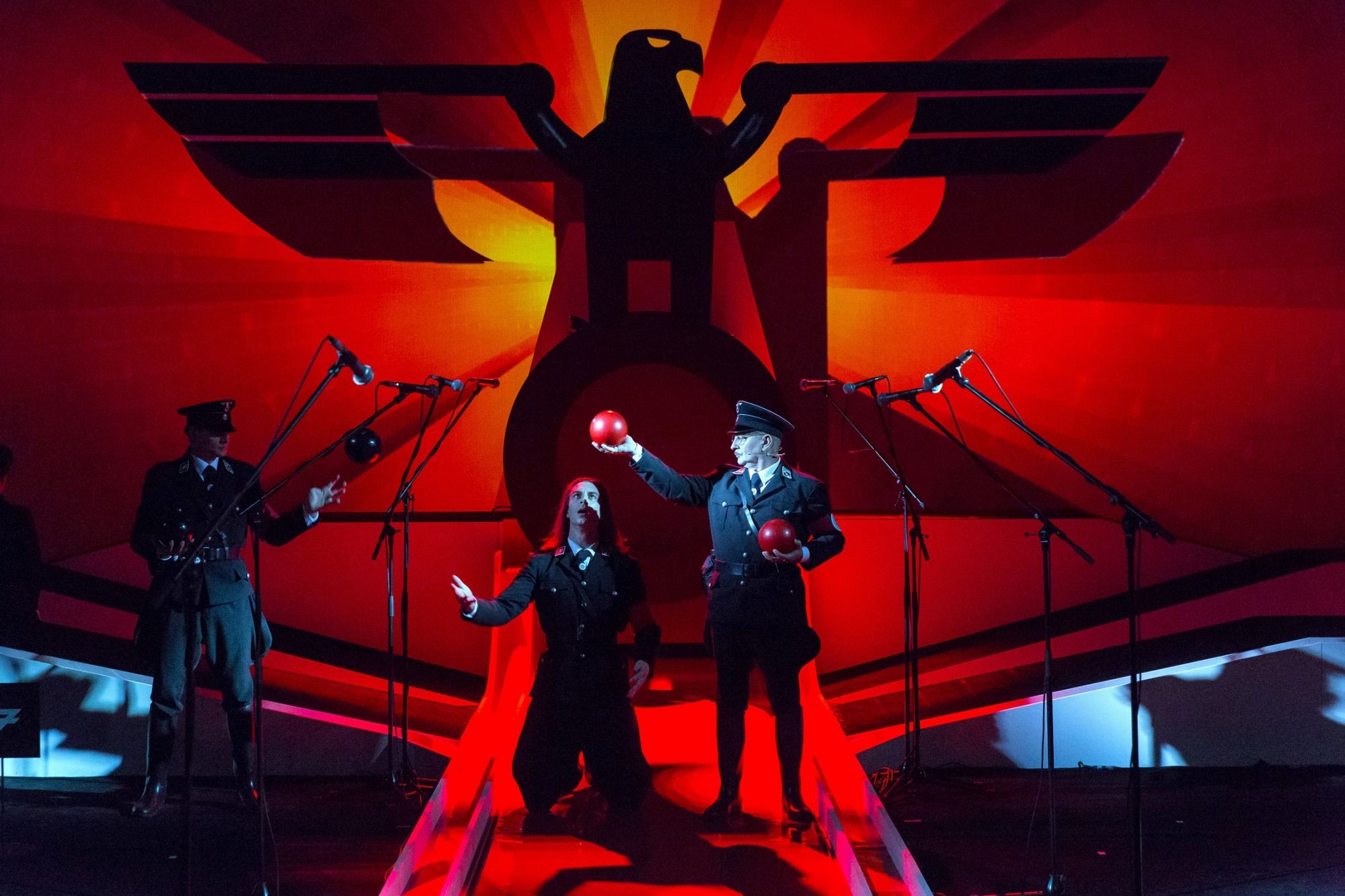 Dragan Živadinov, one of the most important figures of the Slovenian art scene during the 80’s, has abruptly and unexpectedly interrupted his decades-long radical experiments with projects in zero-gravity state and "encapsulation" of the art opuses of his deceased actors into satellites to be launched into space, and has landed firmly onto the ground. What led him to that decision was a powerful and unmistakable realization that the world faces only one relevant topic today: the rise of Nazism (or whichever euphemistic term might be applied to the right-wing populism and extremism, xenophobia, non-liberal democracies and other phenomena evident nowadays). That is how the performance Odilo. Obscuration. Oratorio. was created, warning us about those very things by pointing at their forerunners (or analogies) from the past. Specifically, at Odilo Globočnik: a Slovenian who was one of Hitler’s closest confidants, a man completely forgotten in Slovenia today. Through a spectacular ritual, which is a plausible reconstruction of Nazi political rallies from the 30’s but which is also a stylized and ironical play with that iconography in the spirit of the Neue Slowenische Kunst movement from the 80’s, Živadinov is performing an ideologically unequivocal exorcism. He is thoroughly cleansing us of the Globočnik’s spirit to prevent it from rising back again. Since it refers to the past in two ways – to the times of Nazism and to the artistic movement NSK, which has its place in the history of Bitef – this project proves to be ideal for the Prologue Day.

Theatre performance Odilo. Obscuration. Oratorio. premiered in the insecure time just before the potential outbreak of a new world clash. Geostrategic and geopolitical interests, a new rising of nationalisms and racisms, news scarily similar to those our ancestors faced before and during World War II. Odlo Globočnik is a dark image of the Slovenian history. He is that Slovenian who occupied the highest ranks in the hierarchy of the German Nazi system. The Slovenian who addressed the crowd at one of the notorious Nuremberg Nazi party rallies. The Slovenian who executed operation Reinhard and was responsible for the death of millions. The Slovenian who invented the extermination concentration camp. The Slovenian who managed Risiera concentration camp. The coproduction of Mladinsko and Kino Šiška, based on the textual masses by Peter Mlakar and Dragan Živadinov, is fully conscious of the dangers of the time in which we live, as we are witnessing a new rise of nationalism and racism. The key elements of the project are thus a clear anti-Nazi stand, the killing of Globočnik’s name, and obstructing of the resurrection of his acts. The performance methodologically refuses to understand his acts and National Socialism as something normal. Even more, by using the ritual of killing his name, it wants to once and for all be done with Odilo Globočnik, as well as the Nazism and fascism, and thereby prevent its rise and return. Within this frame of ritual killing, the performance stages an awareness of personalised evil while refusing to enter the theatre identification model. National Socialism is the greatest realism in the history of mankind!

PETER MLAKAR is a Slovenian philosopher and artist, a founder and head of the 'Department of Pure and Applied Philosophy of the NSK' (Neue Slowenische Kunst) movement since 1987. He has authored many books on eroticism and philosophy: Spisi o nadnaravnem (Essays on the Supernatural), Uvod v Boga (Introduction to God), Hribi in doline (Hills and Valleys), Gorska roža (Mountain Flower), Omračitev uma (A Darkening of the Mind), Mera in čut (Measure and Feeling) … His main fields of research are the traditional philosophic subjects and the anomalies associated with them; questions about God linked with the scientificized, technologized, cyberneticized world; sexuality and its relation to the Absolute and the concept of Evil; apophatic theology with psychoanalysis, meontology with logic and cognitive theory and their conundrums … He also published in various international publications (e. g. NSK, From Kapital to Capital, MIT, Boston, 2015) and is the author of a novel Vojna (War). He has worked on various projects by Irwin, New Collectivism and Noordung theatre as well as collaborated with the group Laibach (is also its honorary member).

DRAGAN ŽIVADINOV is a director, an attractor and the founder of the retro-garde process in theatre, a co-founder of the Neue Slowenische Kunst movement, a co-founder of Cultural Centre of European Space Technologies (KSEVT), a post-gravity artist and a candidate cosmonaut. In 1983, together with Eda Čufer and Miran Mohar, he established the Scipion Nasice Sisters Theatre, which self-terminated in 1987. This was followed by the establishment of the Red Pilot Cosmokinetic Theatre, which evolved into the Noordung Cosmokinetic Cabinet. While Živadinov has always been interested in total theatre guided by abstract art, his third, post-gravitational phase of art focuses on the cosmos as a real space of (theatre) art and strives to realise in it the first truly abstract theatre piece of art. The totality of his artistic project must also be understood in the confluence of private life and artistic activity: to conclude his artistic path and his fifty-year project Noordung: 1995-2045, he plans to put himself into orbit and self-destruct.

Živadinov renounces the verisimilitude, the realism that philosopher Peter Mlakar, the author of the play about Globočnik which was the base for the performance, links to Nazism. He called it the greatest realism. And it’s in this non-literalness, this abstractness, that’s meant to prevent the work from becoming just another narration of politics and biography. Its rituality reveals the metaphysics of the evil of the Nazism, itself nothing but a ritual of crime.

With the symbolic act of annihilation of Odilo’s name, Odilo. Obscuration. Oratorio. also constructs itself as a theatre intervention, or a protest, against the renascent forms of fascism, racism, sexism, xenophobia and nationalism that,  while a part of the performance, also have textual allusions to the contemporary politics of intimidation and oppression (focus on family, reduction of female persons to the social role of only mother, pushing women into the private sphere, intimidating racist and nationalist politics, intimidation against 'stealing jobs' etc.). So it is not just about killing Odilo’s name, but also about the killing of the oppressive politics that are only just emerging.

Theatre and reality conflux into one, and the message of the Odilo. Obscuration. Oratorio. contains so much light that it resonates unburdened for the further reflection. 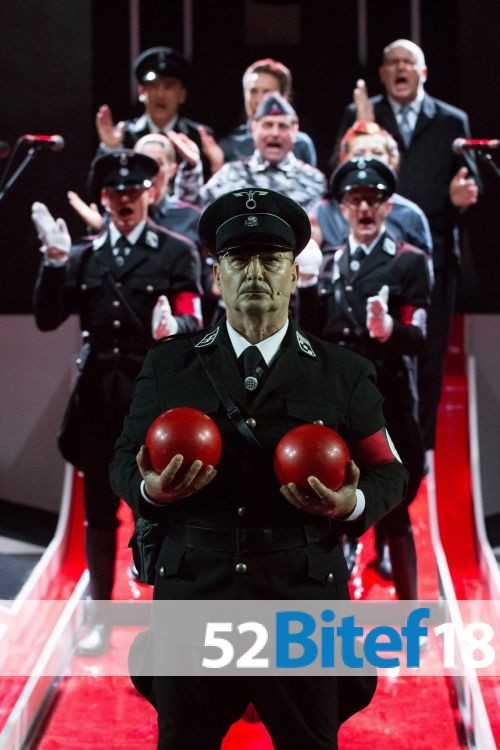 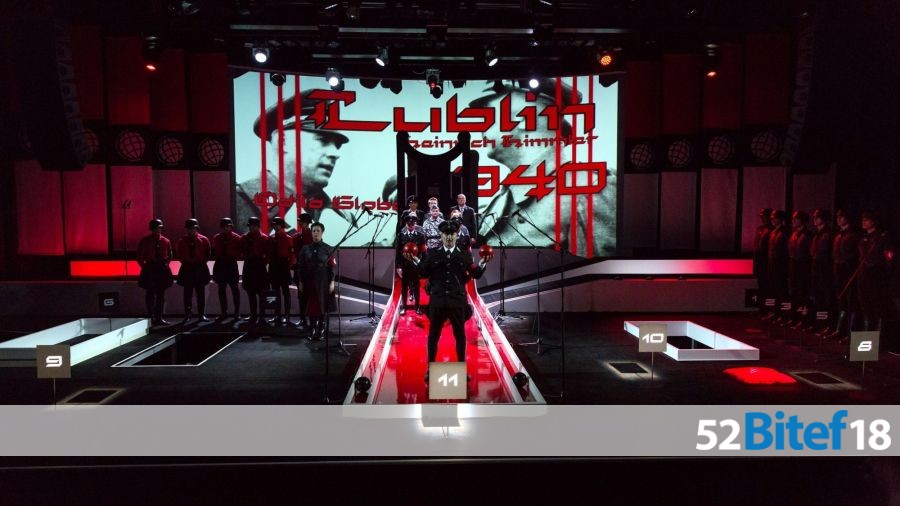 You Can Tell the Epilogue by the Prologue