The body of three installations at 52nd Bitef Festival is rounded up with the work Nachlass, pièces sans personnes, by the famous director Stefan Kaegi, one of the three members of the internationally acclaimed collective Rimini Protokoll, produced by one of the leading Swiss theatres, Théâtre Vidy-Lausanne. Although in terms of its basic art concept – spatial installation with several rooms shaped by the abundance of documentary material – this work could be related to the installation Eternal Russia, yet is significantly different from it, and completely unique in terms of its topic and the atmosphere and emotion it conveys. This work does not represent a "historical maze" which keeps bringing us back to where we started from, but a "museum of memories" of particular "common" people who are no longer alive or are about to leave us. Each room is a detailed realistic representation of those people’s departure, i.e. illustration of their imagined/desired exit, the illustration of the significance it had for them, and the shapes they wish to be remembered by. This installation, therefore, is not simply an exhibition of memorabilia linked to unknown people, but a material physical frame for a powerful experience in terms of atmosphere, emotion and metaphysics. Within 52nd Bitef dramaturgy, this work by Kaegi represents a key departure from the phenomenon of historical and social (therefore, collective) disappearance, toward a nearing of the personal, the singular, biological and/or metaphysical one.

Stefan Kaegi and his collaborators spent two years in hospice centres and hospitals, in scientific research laboratories and funeral homes, in retirement homes and religious centres, among coroners, neurologists and lawyers - for all of whom death is an ongoing concern. They then met with people who have chosen for different reasons to prepare for their passing. With some of their interlocutors they created special rooms in which each individual Nachlass could be expressed. Inside you can discover traces of the lives they’ll leave behind, or the manner in which they imagine their own passing, or the enactment of a scene of transmission, a part of their legacy or something they wish to share before their departure. The distance inherent to all artistic creation has made it possible for these individuals to dare to envision their passing and imagine what a place evocative of their memory would look like. An elderly couple that has decided to die together recounts their life and remembers their youth; a woman realizes a cherished dream before dying; a father addresses his daughter; a scientist analyses the technical aspects of his passing; a man of Turkish origins from Zurich sees his death as a return to his roots and his land of birth.

STEFAN KAEGI produces documentary theatre plays, radio shows and works in the urban environment in a diverse variety of collaborative partnerships. Using research, public auditions and conceptual processes, he gives voice to ‘experts’ who are not trained actors but have something to tell. This is how he directed “Mnemopark,” a model railway world in the Basel Theatre - a live film (set in 1:87 scale) that has been shown in over thirty cities between Tokyo and Montreal. Kaegi has toured across Europe and Asia for over three years with two Bulgarian lorry drivers and a truck which was converted into a mobile audience room (“Cargo So a”). In 2008, he developed “Radio Muezzin” in Cairo - a project about the call to prayer in our age of technical reproduction, and in 2011, “Bodenprobe Kasachstan” about migration and oil in central Asia. At the moment he is touring with “Remote X”, a modular site specific audiotour for hordes of 50 listeners. In 2010 Kaegi was awarded the European Prize for Cultural Diversity. In 2011 Kaegi curated the “Idiom”- section of the Malta Festival Póznan. Kaegi co-produces works with Helgard Haug and Daniel Wetzel, under the label “Rimini Protokoll”. Rimini Protokoll’s purpose is to pry apart the sense of reality and present all its facets from unusual perspectives. Rimini Protokoll was awarded the Faust Theatre Prize in 2007, the European Prize for New Theatre Forms in 2008 and in 2011 the silver lion of the Biennale for Performing Arts in Venice. The multi-player video-installation “Situation Rooms” about the weapons-industry got the Excellence award at the 17th Japan Media Festival. In 2015, Stefan Kaegi has received the Swiss Grand Award fot Theatre/ Hans Reinhart Ring.

DOMINIC HUBER is a stage designer and director whose work opens up new zones of the performative. His preferred sites are spaces that not only can be seen by the audience, but entered and experienced by individuals or entire groups. Very much in the sense of augmented reality, they work on expanding experiences of the senses, artistically modifying, activating, and manipulating actual spaces and situations. As a result, the audience actively engages with and explores surprising characteristics of their surroundings. Since 2008 Dominic Huber has been regularly collaborating with Stefan Kaegi and Lola Arias, with such diverse works as: “Airport Kids”, “Heuschrecken”, and “Familienbande” and with Sebastian Nübling, most recently for “Volpone” at the Schauspielhaus Bochum and “CARMEN DISRUPTION” at the Schauspielhaus Hamburg. Huber designed a series of theater installation projects together with Bernhard Mikeska (mikeska: plus:blendwerk) like “Rashomon: TRUTH LIES NEXT DOOR”, “MARIENBAD :: coming soon” and at the Schauspiel Frankfurt “Je t’aime :: Je t’aime” and “Making Of :: Marilyn”. In 2009 the City of Zurich rewarded Huber’s work with a 3-months residency in NYC. Dominic Huber regularly teaches at ZHdK - the Arts University of Zurich.

Do you ever think about your death? Do you think about how you would like to steal away, and what kind of trace you would like to leave behind? If that is not the case, this theme will nevertheless be playing on your mind after having seen Nachlass, a work of great sensitivity. The project is helmed by Stefan Kaegi, a specialist of the “theatre of the real”, accompanied by Dominique Huber and Rimini Protokoll. Together, they offer up the words of nine people, old and young alike, who for various reasons have opened up their deaths to scrutiny. Without being flippant, this journey into Deathland is neither sinister nor gloomy. It is in invitation for us to reflect on our afterlife.

With Nachlass, Stefan Kaegi and his team have gone far beyond the simple document, the raw testimony which we sometimes see in the fine arts. He provides each of the nine people who confided in him with their own mini-theatre. They have chosen the sets themselves, and are limited in their speaking time, with the possibility of addressing the audience directly. One of them, who has offered us a drink of water, asks us not to forget to throw the cup in the bin as we are leaving. It is moving, very unsettling, but not sad. Bracing rather; and at times, almost joyous.

Sharing these last moments transmitted only through voices, the audience provide a sympathetic ear for their wishes and choices. Gone are the gadgets of Rimini Protokoll’s previous performances: we are here at the heart of an immersive ontological experience. It is with gentleness and tenderness that we successively share these intimacies, without pathos or apprehension, with only humanity vibrating behind the walls. 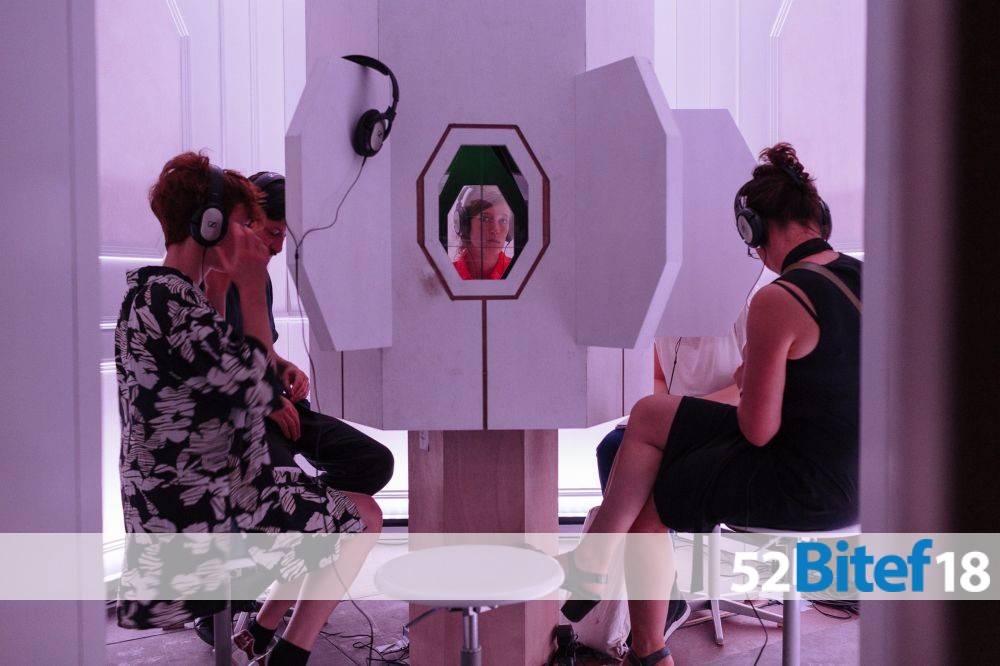