Review of the performance Gorki – Alternative for Germany?

Gorki - Alternative for Germany? right from the start and right until the very end smells like Frljić: using pseudo-quasi-documentary form, Frljić is toying with fictional and documentary, creating a probable reality which, since it seems “truly lifelike” and not “theatrically illusionary”, produces effect. Creating this “lifelike” reality is mostly based on the actors’ personal confessions, for e.g. when actress Svenja Liesau shares her traumatic past when she was raped by her ex-partner and to prove her story, she brings her child conceived during the rape onto the stage. Liesau, as well as the remaining actors (Mehmet Ateşcı, Maerike Beykirch, Nika Mišković, Falilou Seck, Till Wonka), brings onto the stage partially her own experience, and partially what is assigned to her character, the character of “Maxim Gorki” actress, building a mix of her character and her personality, which is in accordance with the semi-documentary narrative of the performance.

Actors/characters are almost constantly addressing the audience, in a didactic and, as is typical for both “Gorki” and Frljić, in an openly political and direct manner, performing deconstruction of various topics: from the very theatre “Maxim Gorki”, its policy of work and its public preference in employment of minorities, personal problems of the present actors, to the problem exposed in the title - the extreme right-wing political party called Alternative for Germany (Alternative für Deutschland - AfD).

Deconstruction and the deconstructive analysis are not found only in the text (dramaturgy by Aljoscha Begrich) but also literally on stage. After verbalizing the problems of working in “Gorki” with a hint of sarcasm (dark-skinned actor is in a dilemma whether he is employed in “Gorki” in order to fill the quota of dark-skinned actors or because he is truly talented), behind the iron curtain (which is also the topic of ridicule in the comments “here is yet another “Gorki” performance under the iron curtain”) appears a model of the “Gorki” theatre building, big enough to take up the entire proscenium. It stays in that shape for a short time since the actors will take down the cast walls, leaving only the structure of the building. From such a stripped down “Gorki”, unsheltered actors share their fears, fear for the survival, for the survival of their close ones, but all of them also express their for Germany, too.

Several scenes later, from the same unsheltered “Gorki”, the same actors who have just expressed their fear for Germany start quoting parts of Goebbels’s speech. The fact that the actors’ characters from the deconstrued “Gorki” utter Nazism, offers an ample space for interpretation: if we allow the Alternative for Germany to become an alternative to Germany, this is what ensues.

Space for interpretation is given by the very fact that “Gorki” is deconstrued by “its own people”, not the people of the extreme right, which might seem as a paradox. During the entire performance, each of the actors wears some part of the Nazi uniform (one actress is wearing high boots, another trousers, an actor is wearing half of the coat, etc.) which makes us wonder - do all of us, even the ones who play in the left-wing theatre, carry a grain of Nazism inside? And does the deconstruction of one’s own thought help in the recognition of that grain? Given the amount of deconstruction in this performance, the answer, according to Frljić, is probably yes. There is, however, also one construction: all the Nazi details end up on one actress. One by one, the ones who were wearing them keep putting them onto her, creating thus together a character completely dressed in a Nazi costume - the society has turned her into what she is.

What is common to both the personal (actors’ confessions) and the social (comment of the system) in this performance, and each personal is permeated by the social and vice versa, is a certain amount of a negative -ism. Although we could link all the elements of this performance on that level, what is missing is a more tangible dramaturgy to connect all the separate and small deconstructions, so one gets easily lost among them, losing track of how it all got from the comments on “Gorki” repertory, to the moment when actors talk about becoming members of AfD (directors idea, for the need of the project), or to the comment when, hidden in what remained from “Gorki”, the same place from which they shared their fear for Germany, they start quoting parts of Goebbels’s speech.

Gorki - Alternative for Germany? is an appeal to call things - as Frljić stated at the follow-up discussion - “by their names”, it appeals for the AfD to be taken seriously and to be called Nazism and not right wing. The performance raises and dissolves current problems in Germany and in German theatre, some of which, however, are miles away from the Serbian -isms. For all these reasons, this performance is best understood through the personal and personally moving, while our local problems can be just vaguely recognized. However, that does not diminish the attempt to point out at German problems; some eighty years ago, German local issues turned into global problems. 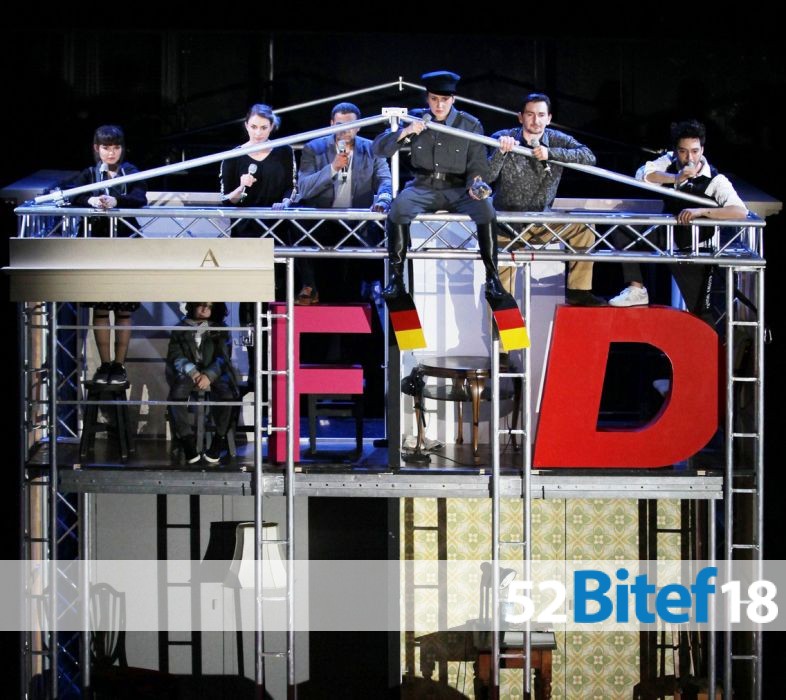