It was impressive in several ways. Firstly, because it links the tradition of avantgarde theatre, an avantgarde combination of piano movement, the use of other elements of piano frequencies with this primary language manipulation. The festival which starts with a slogan “World without Us” seems truly interesting, since it goes back to the ancient topic of the disappearance of the man, the disappearance of language and what defines the man. We can talk today about anthropocentrism but what defines the man in the first place is the trust in language and the fact that language builds culture, that language builds a structure. Also, the ancient flow of alienation appears in a new form, very specified on all levels, ranging from intimate confessions to political speeches, which is an old source of perception set in a specific technological surrounding. What we have just seen is human misery and depersonalization in a new and yet very clearly recognizable shape.

A very interesting performance, an interesting concept, a good text which deals with rising right-wing conservative tendencies, shown through a good form and in a good rhythm. The performers are fantastic, switching from language to language, singing, gesturing. Truly good.

A great performance, I think I couldn’t imagine a single pair of our actors who would be capable of doing it. It is amazing because it demonstrates what Horvat said in his opening speech - the destruction and the depth of the misery we have globally fallen into.

A fantastic performance, they were truly impressive, it is very rare to see skills like these; they’ve mastered some complex things in an amazing way, the text, the languages, they were good, and accurate. I’m completely impressed.

I am impressed by the actors’ skill to speak 24 foreign languages for an hour and a half. The performance is reduced, static, its elements are simple, but it was still attention-grabbing thanks to the chosen material and the actors’ skills. I knew what the topic was going to be and I thought I was going to be more touched but I wasn’t. Maybe that’s because I expected some other things to be chosen from some countries, but I believe it wasn’t easy to choose just one illustration of one society. Still, I am satisfied.

Excellent performance! Very demanding, very hard. We’ve heard 25 languages, I think, it probably wasn’t easy for the actors to master it all. The messages are powerful - the struggle against populism, xenophobia… I don’t know what else to say, amazing!

I was impressed by the way the performance perceives the European Union, its specific features and the differences that exist. I was impressed by the idea of using all the official languages, and the attempt to find something that is specific for each nation, and what is unique for the entire Europe is the fact that the similarity is lost in the differences. I think it is truly inspirational and offers something the audience didn’t have a chance to see by now.

Tijana Palkovjević Bugarski, the manager of the Gallery of the Matica Srpska

It’s a magnificent performance, especially in terms of acting. It speaks of the world we live in and that is very good. Both performers are brilliant, it must’ve taken great deal of effort to learn all those languages, and to show the misery. That’s not easy at all.

I am fascinated. The three of them are simply superb; the pianist, the actress, and the actor. Still the actress is most fascinating, her style is great, her ability to stay out of some kind of show but to stick to a very precise line. That’s what fascinated me. The performance on the whole, well, I have various thoughts. 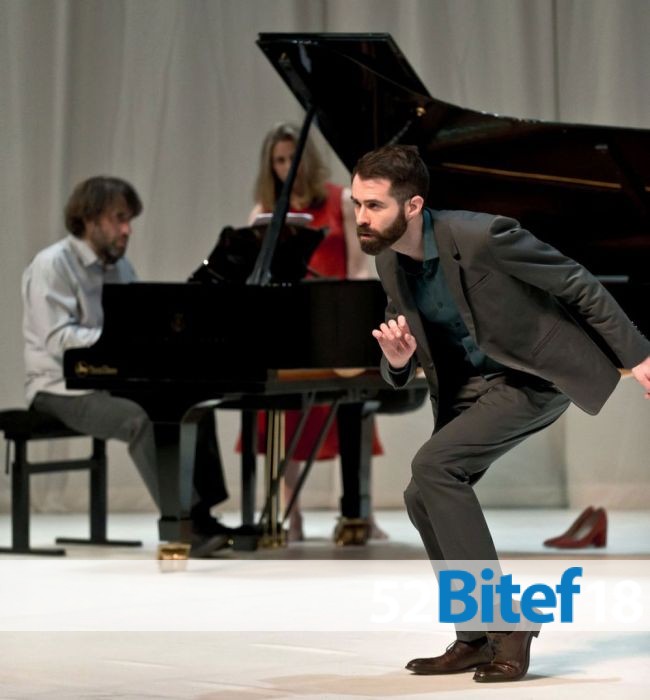